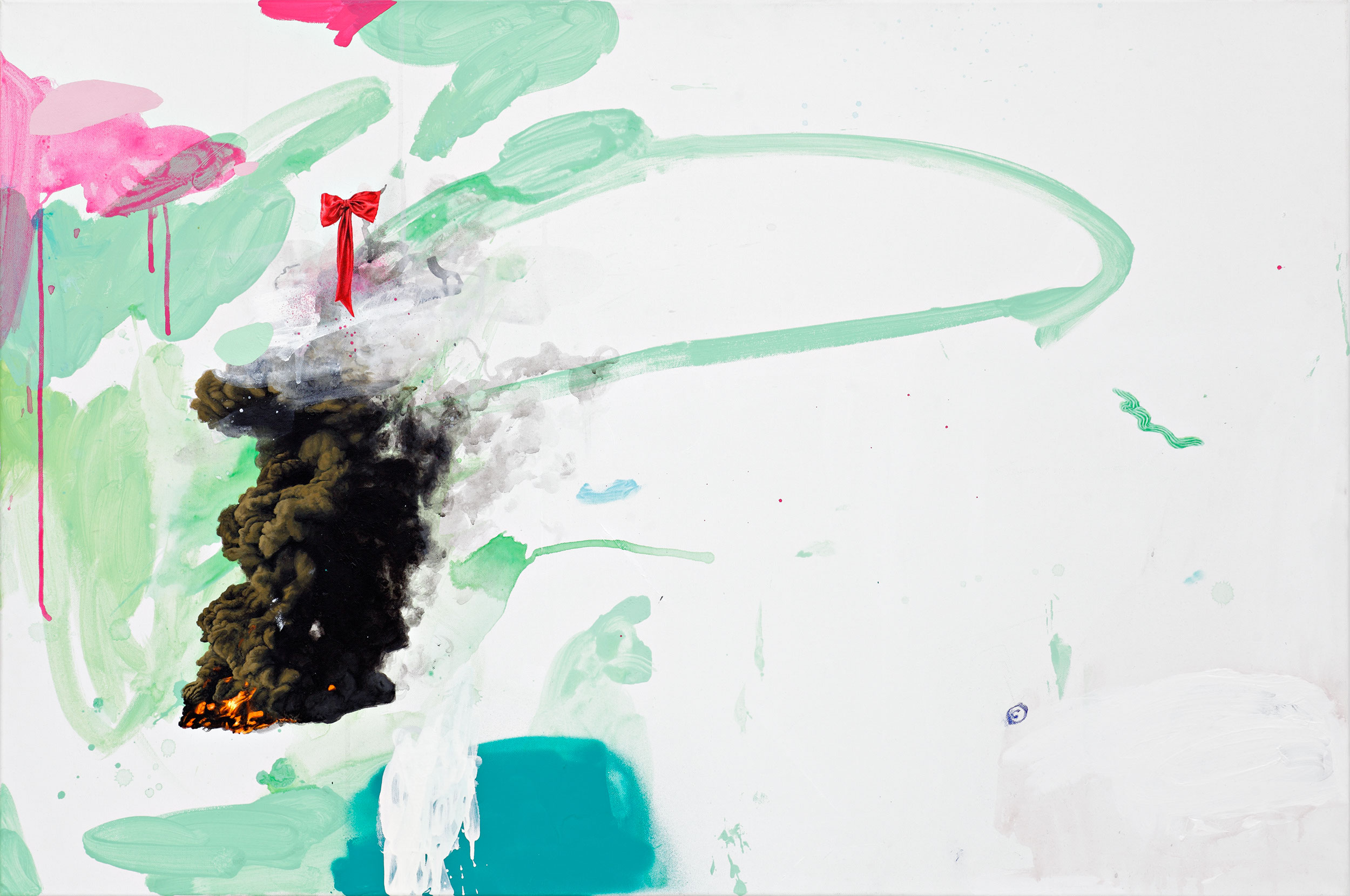 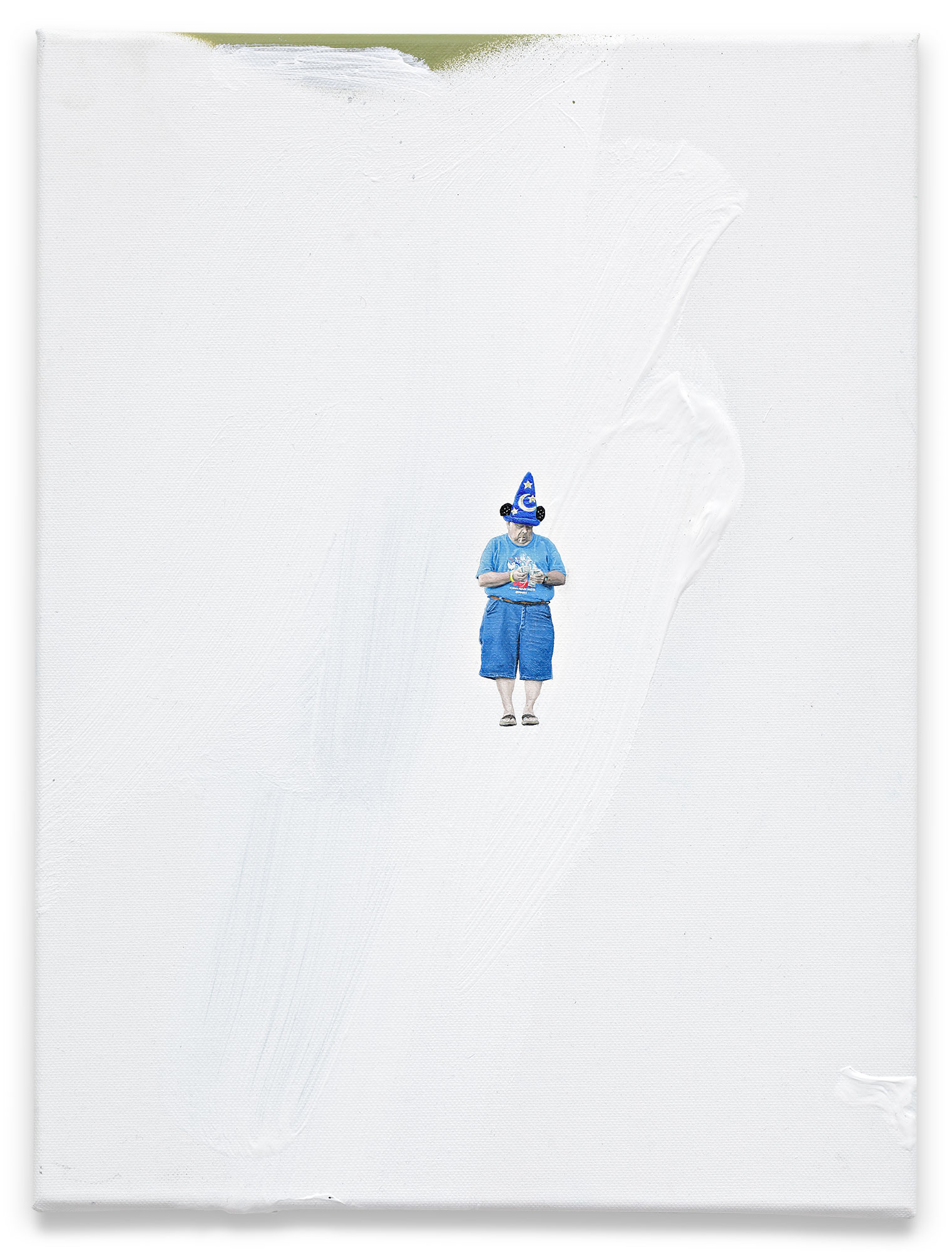 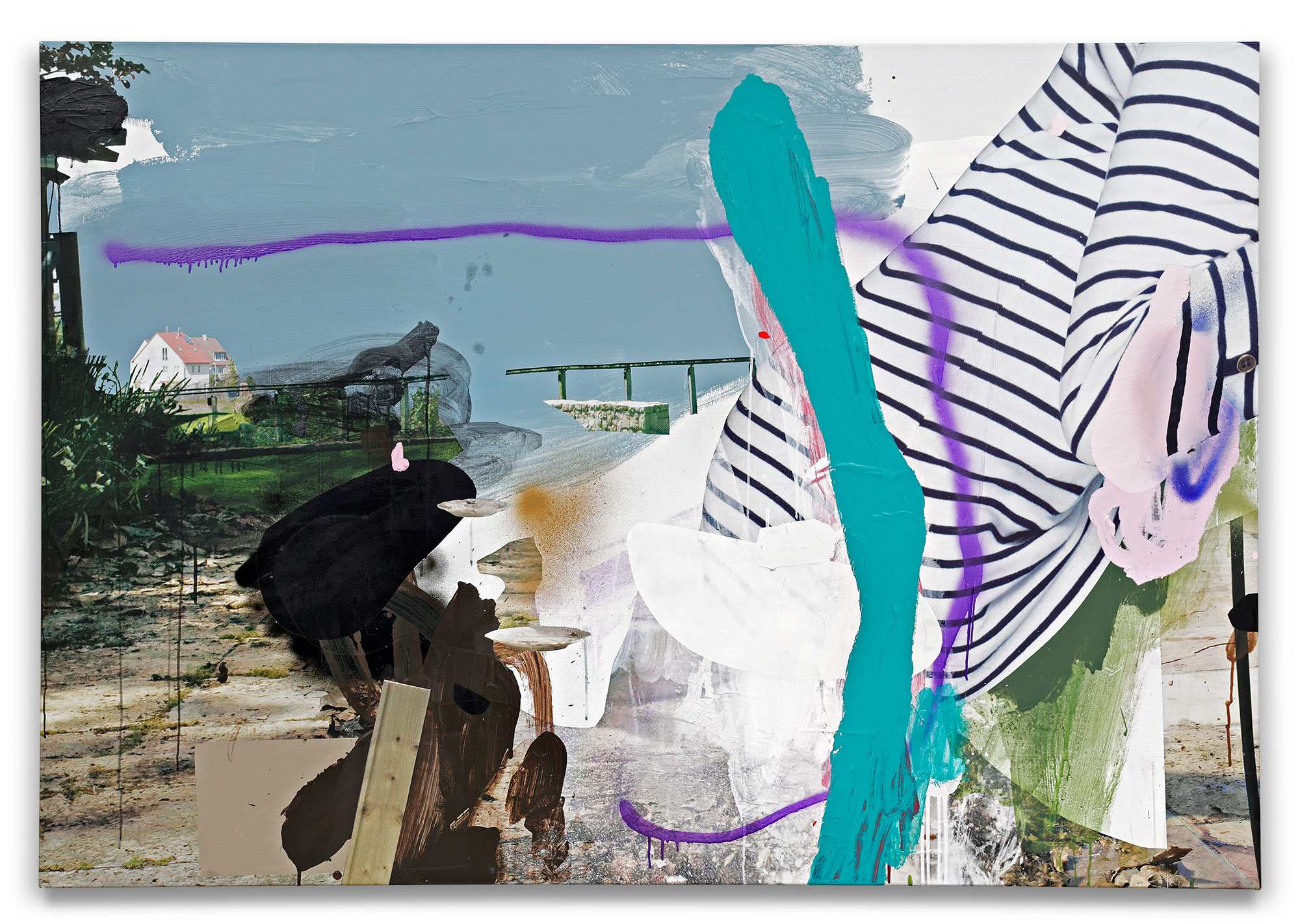 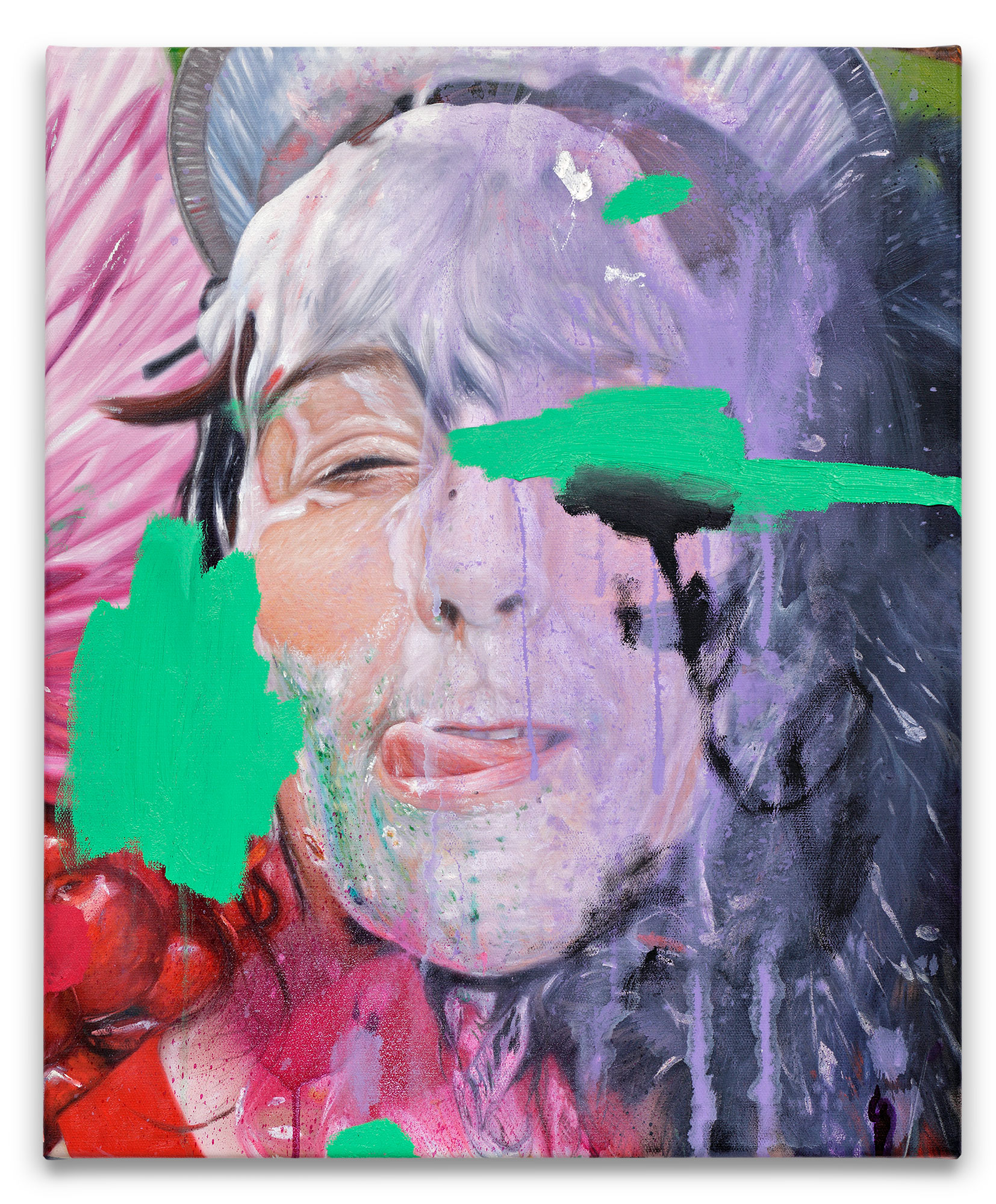 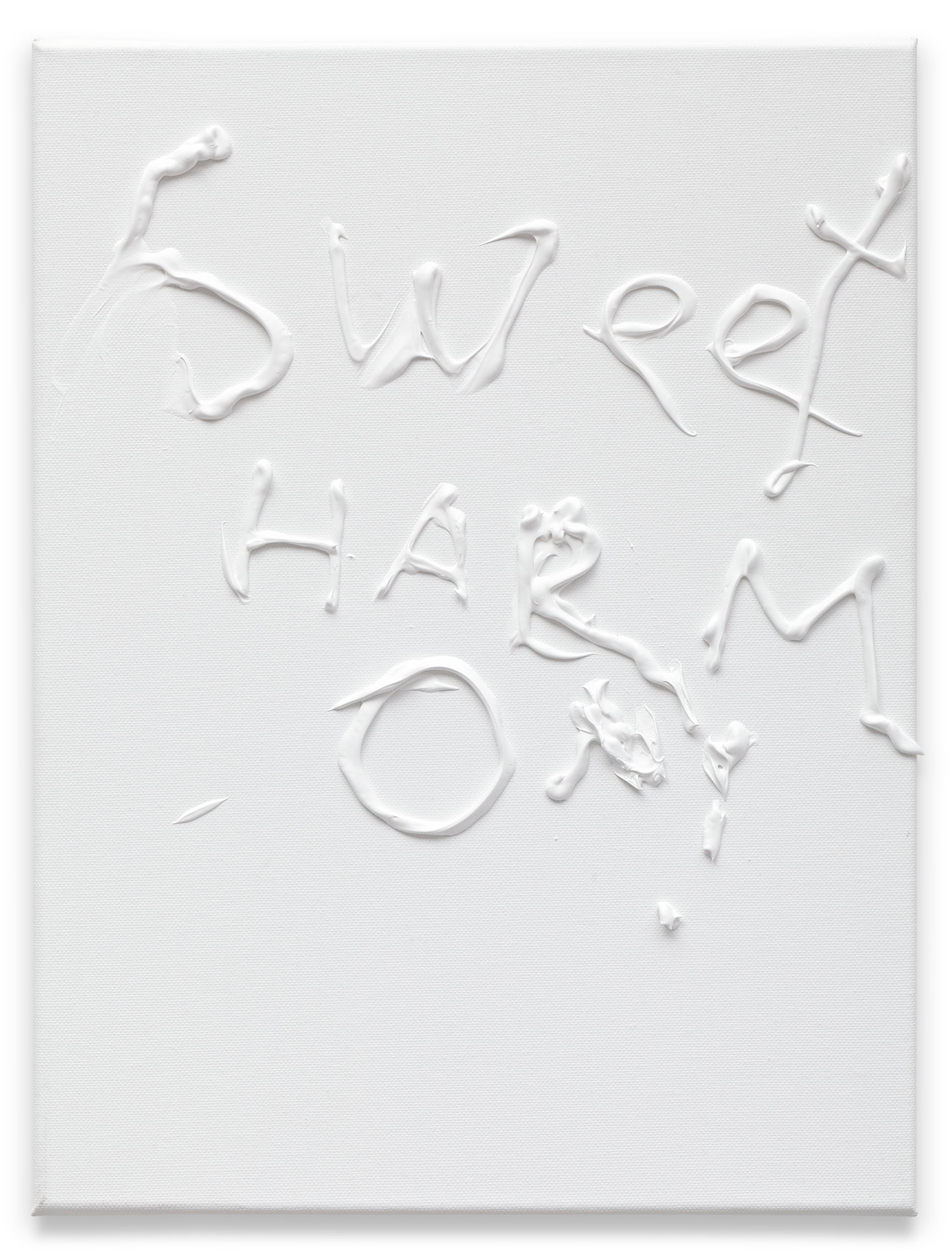 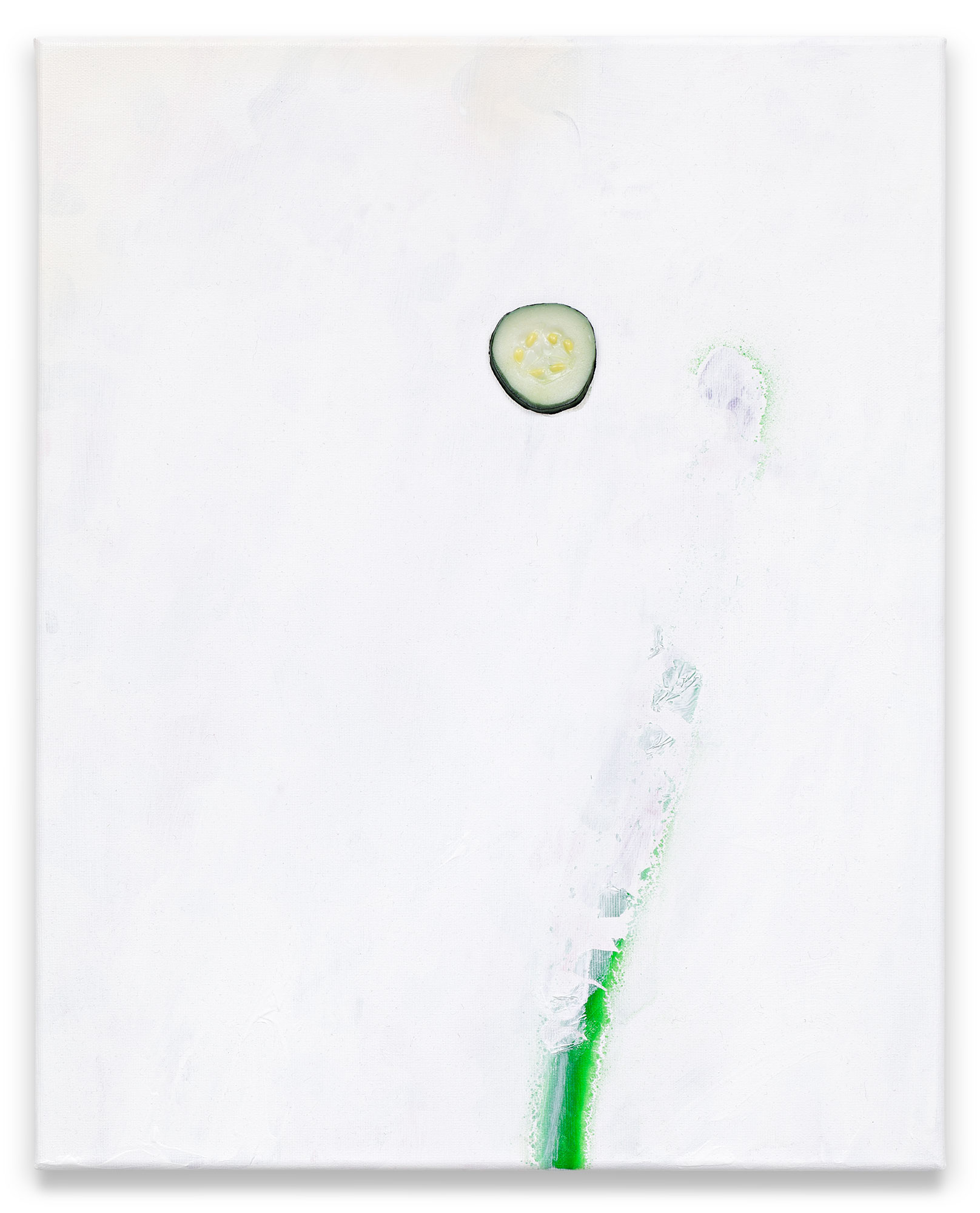 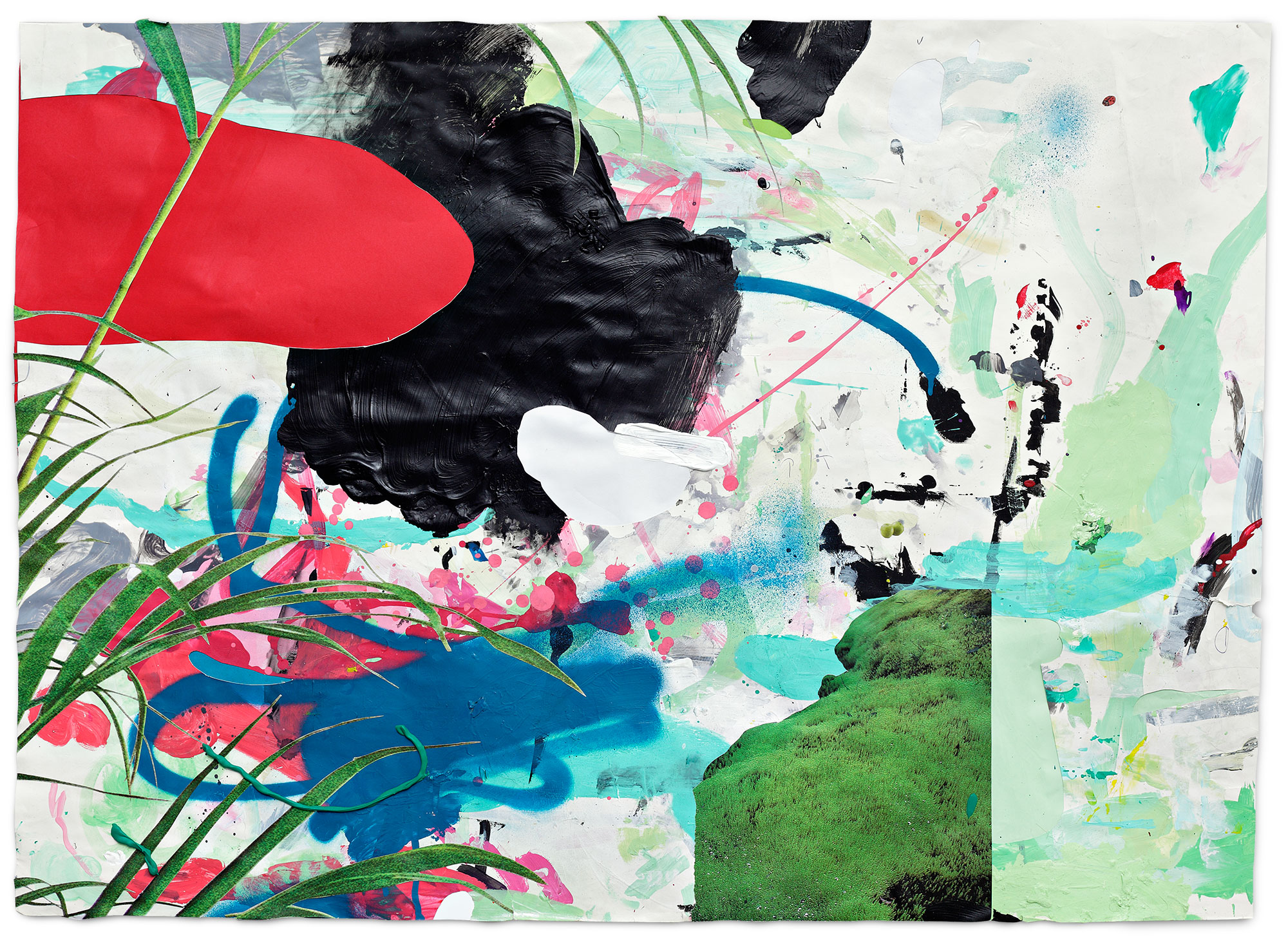 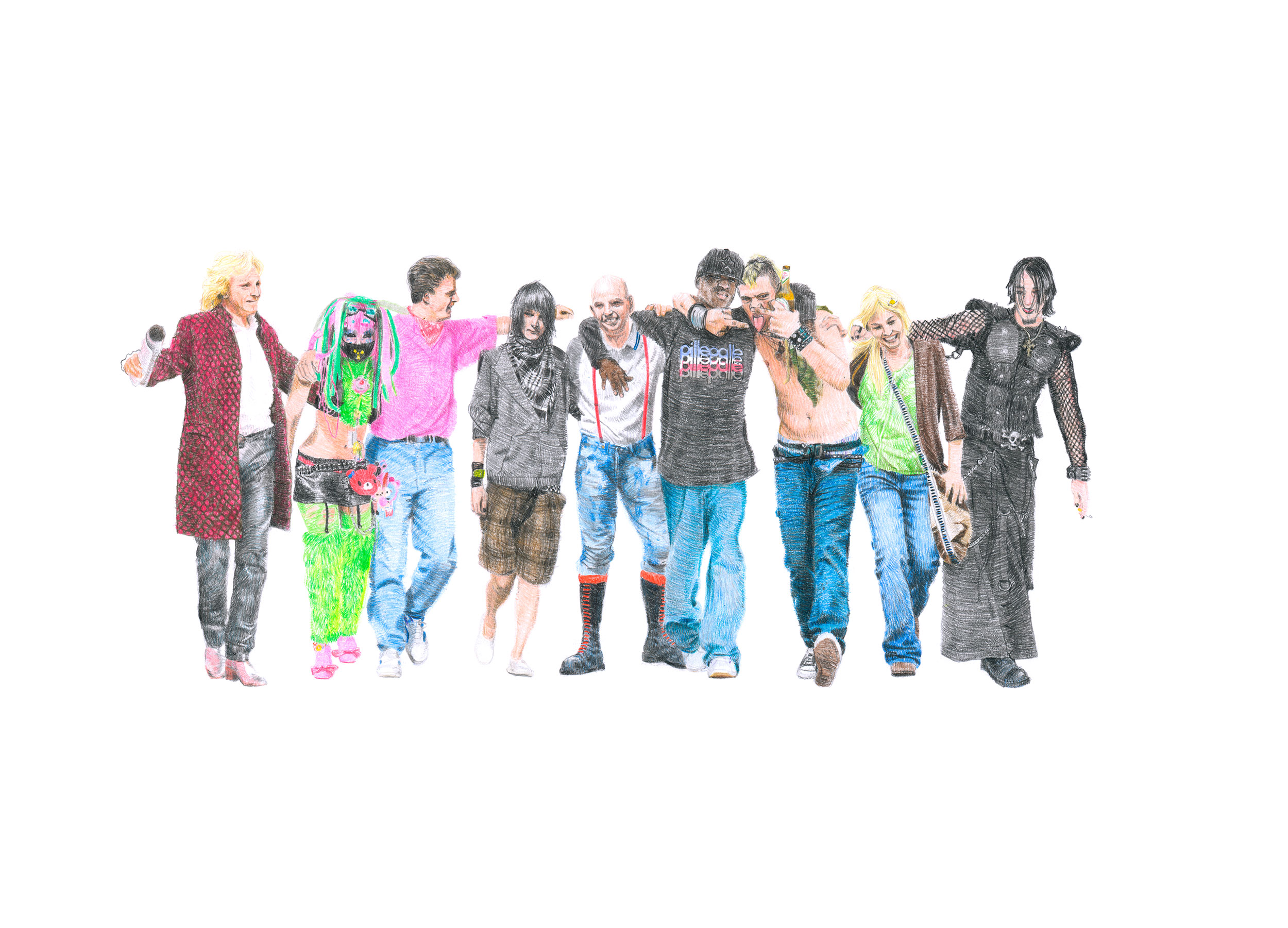 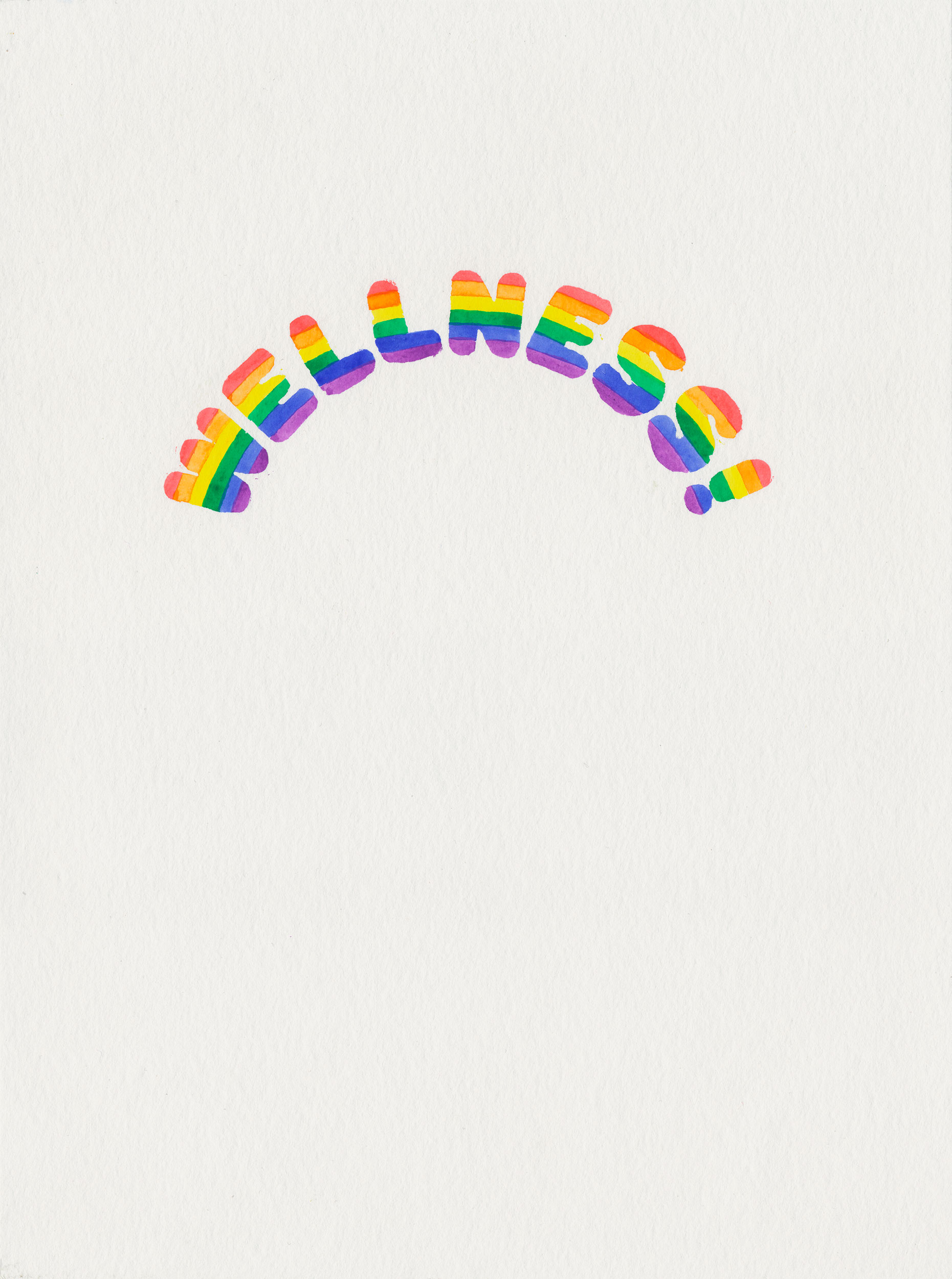 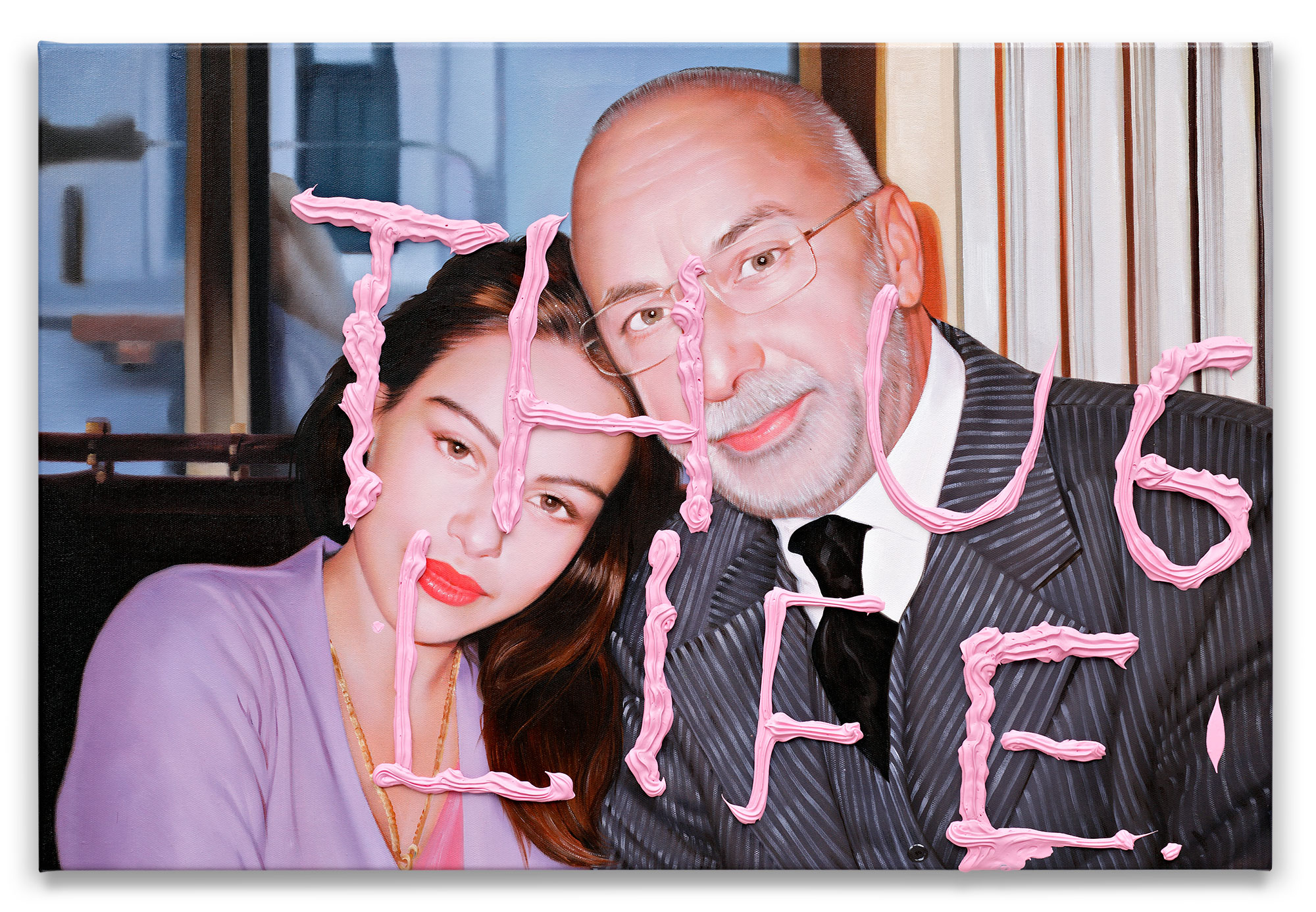 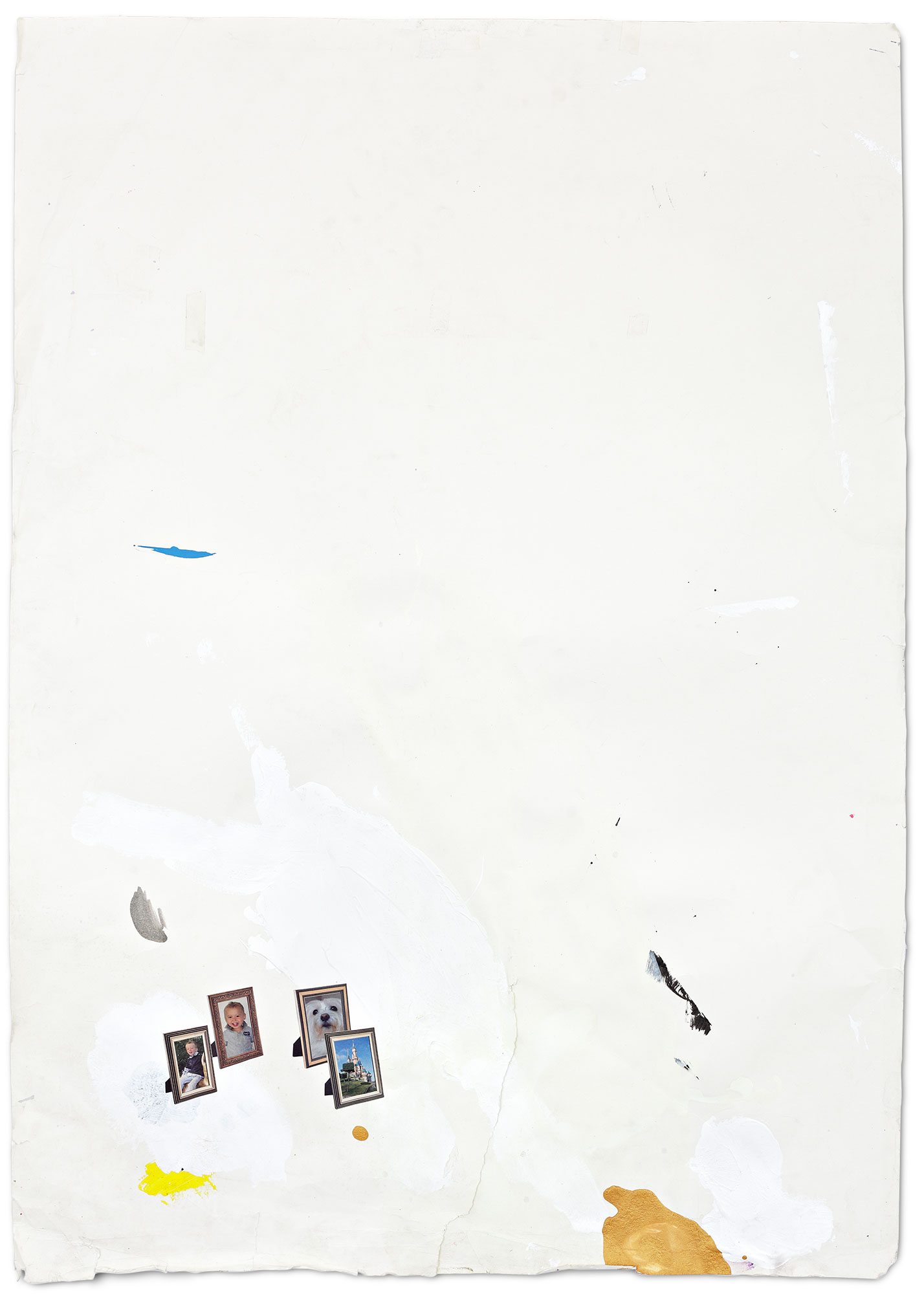 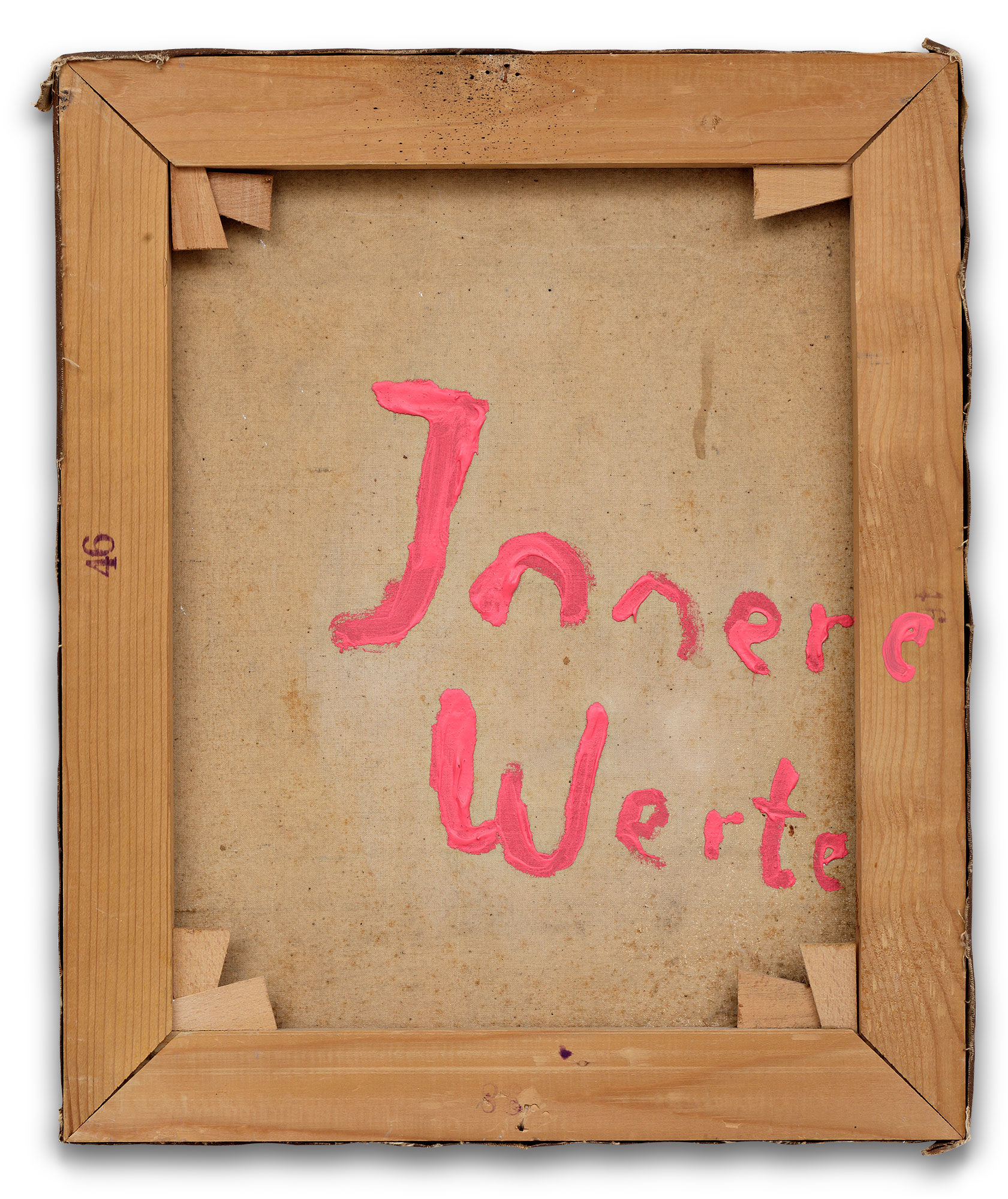 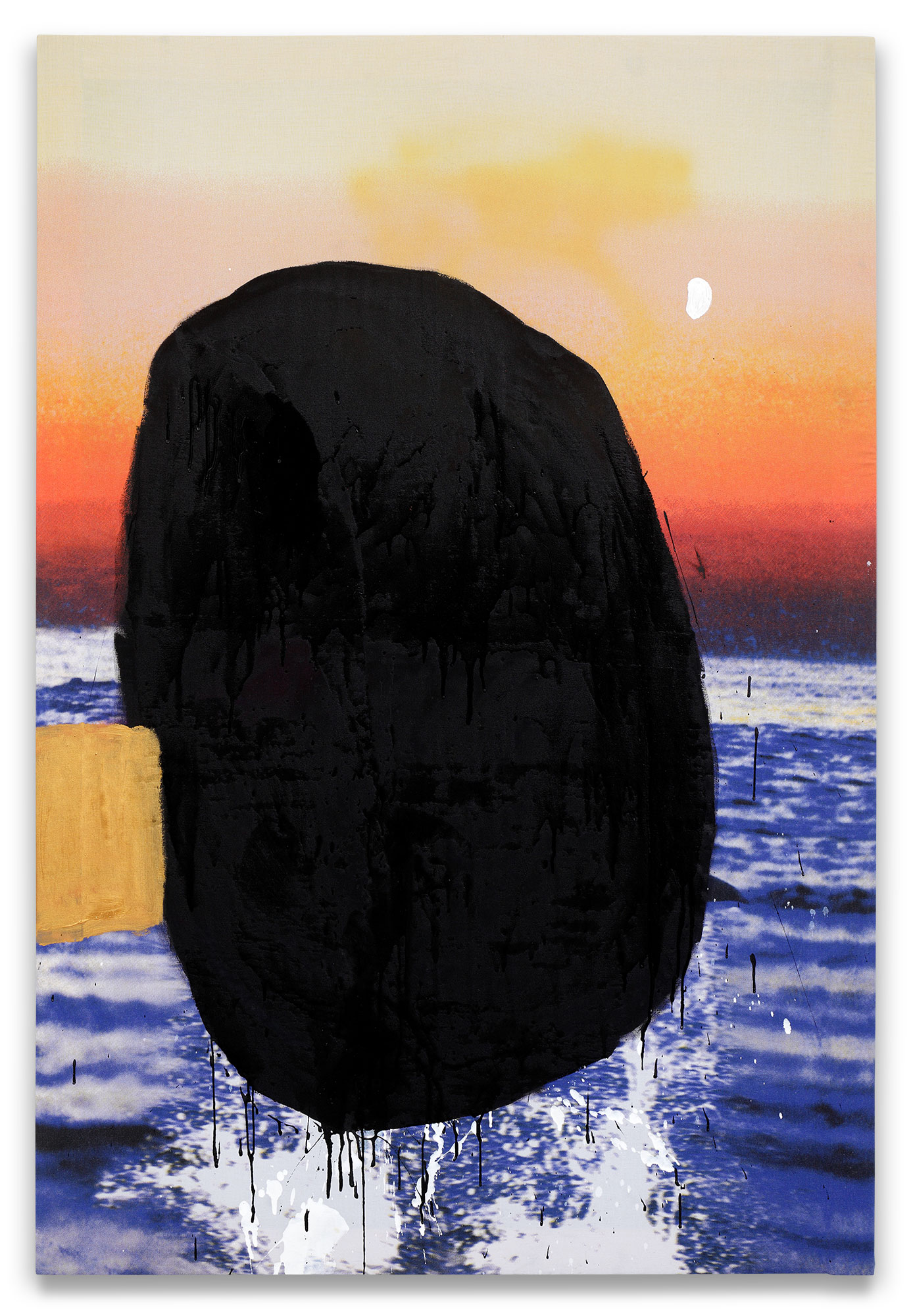 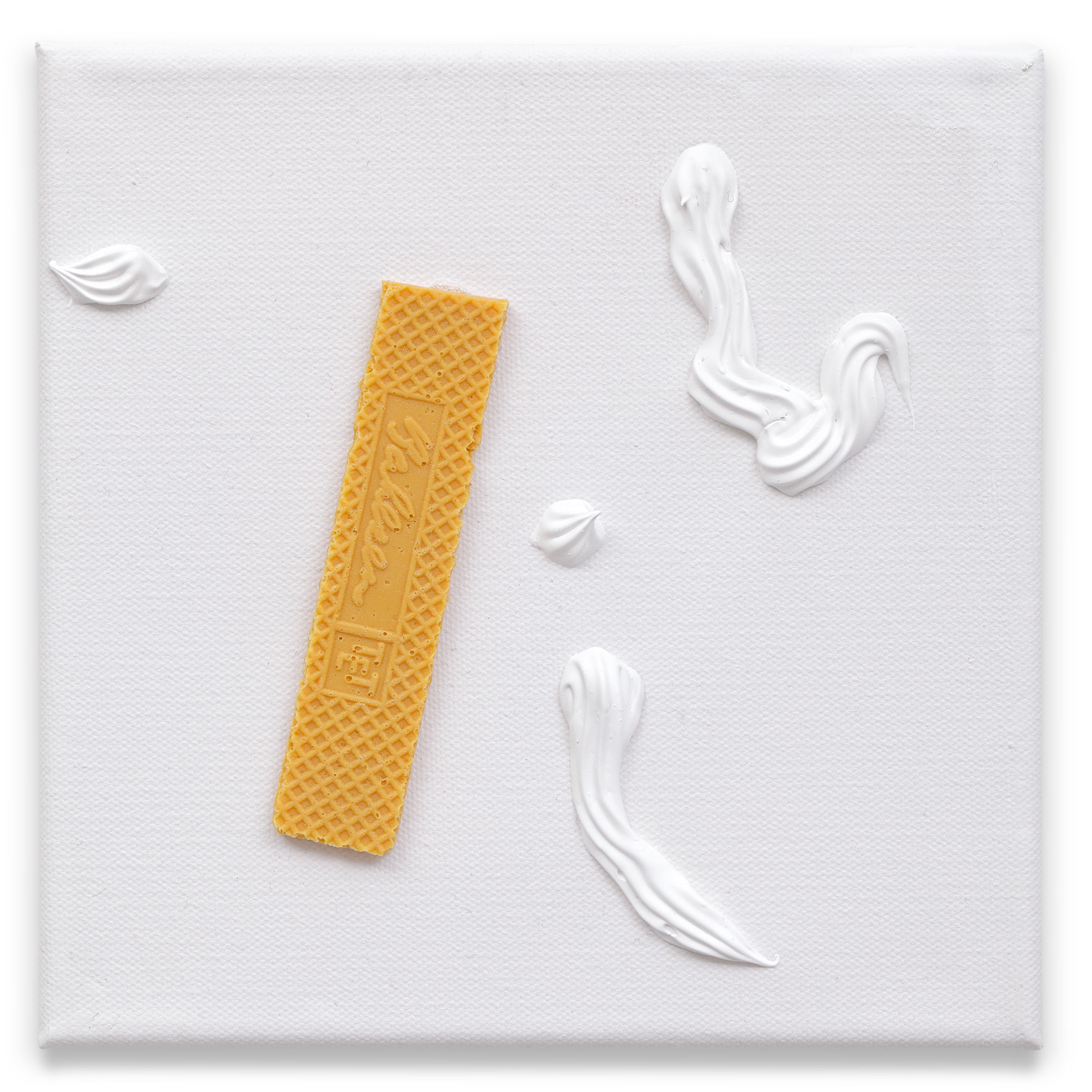 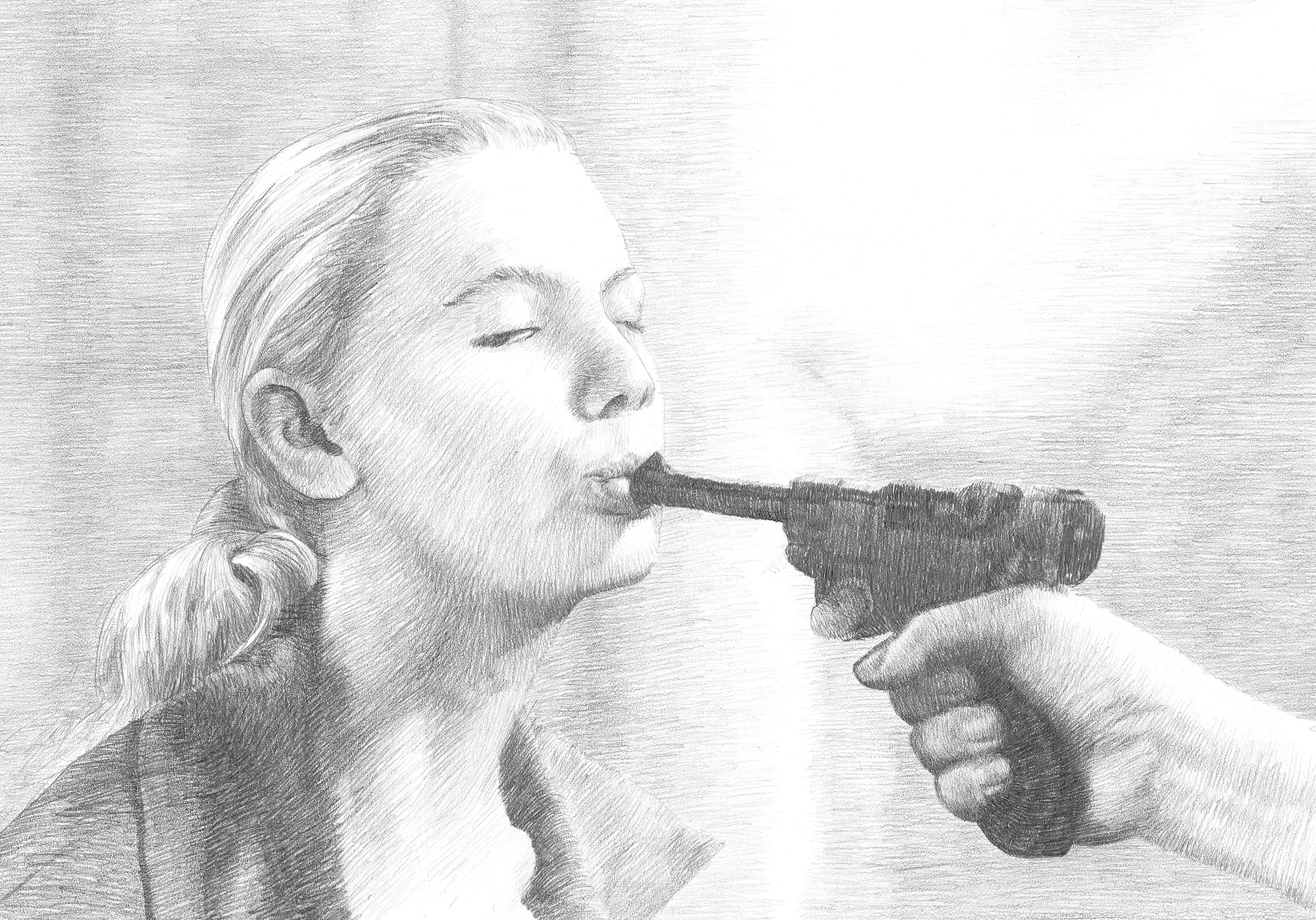 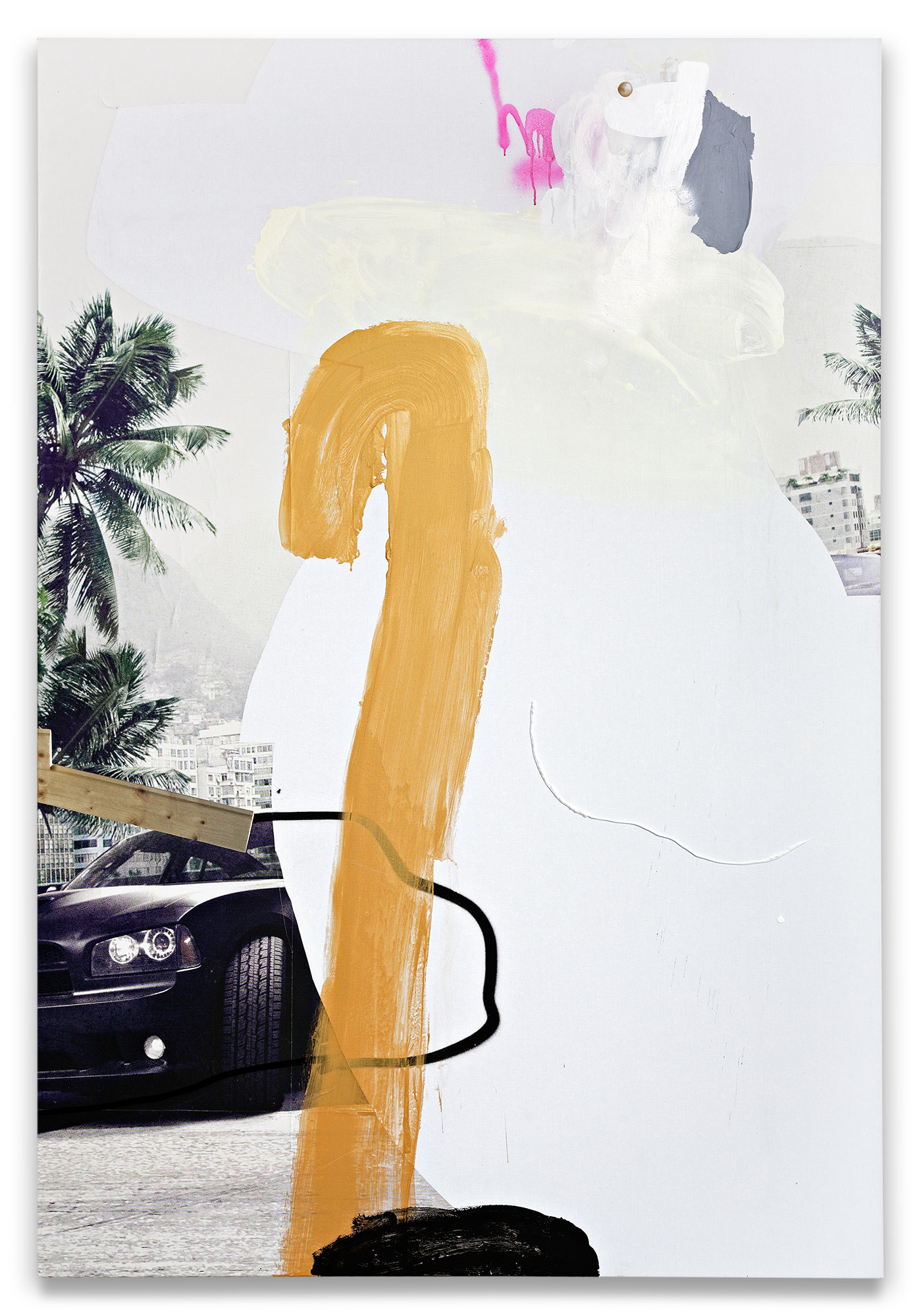 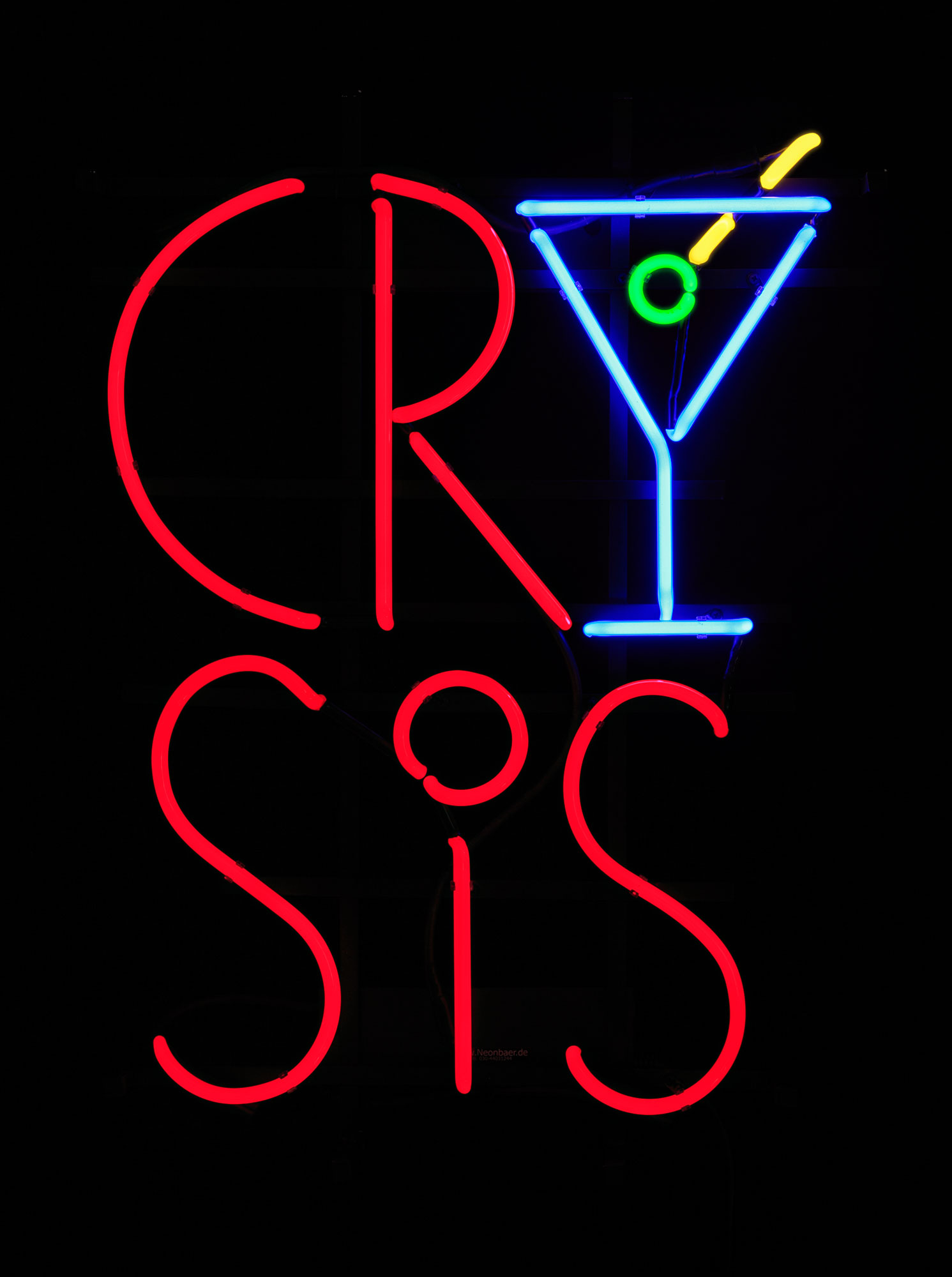 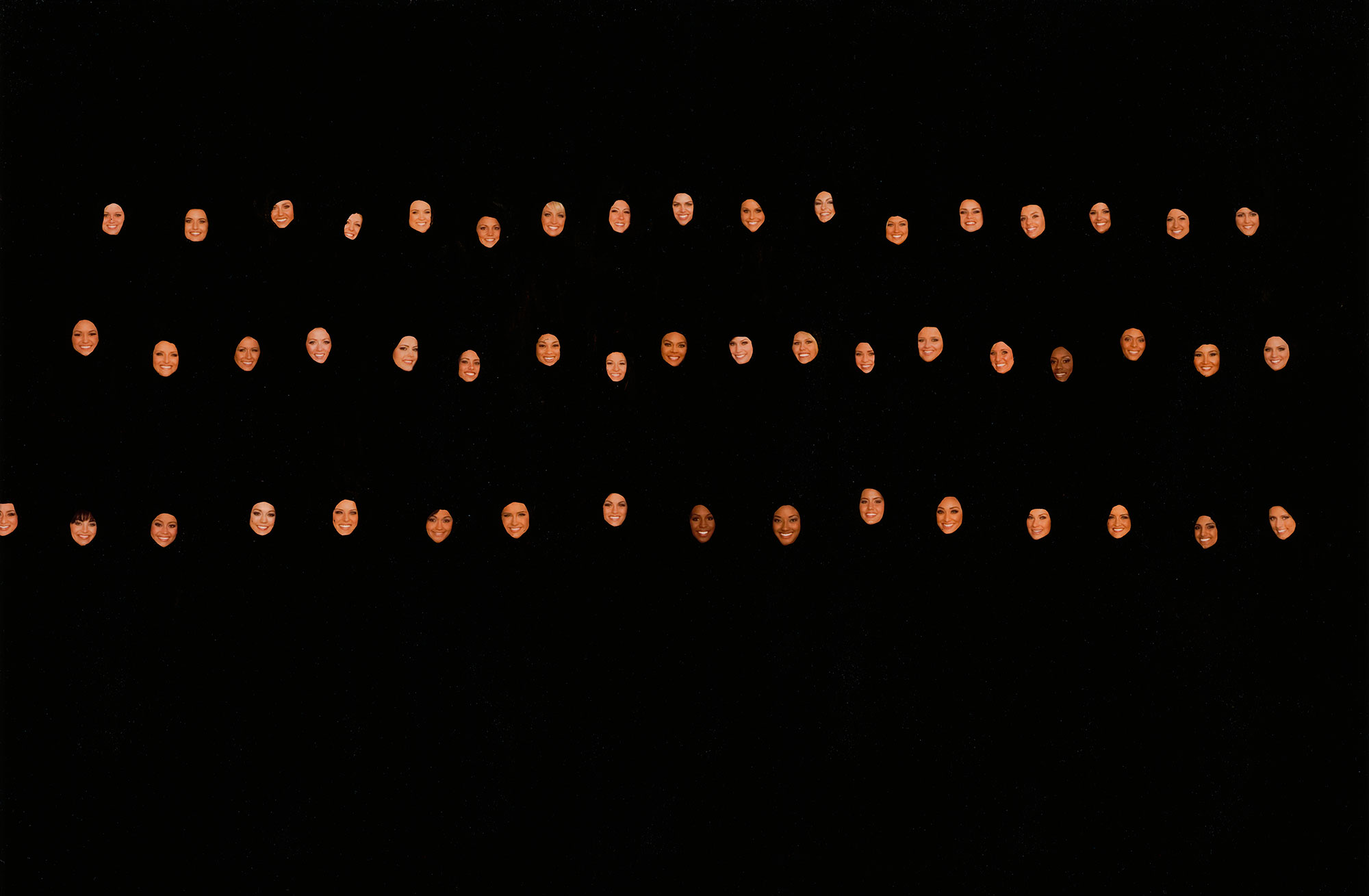 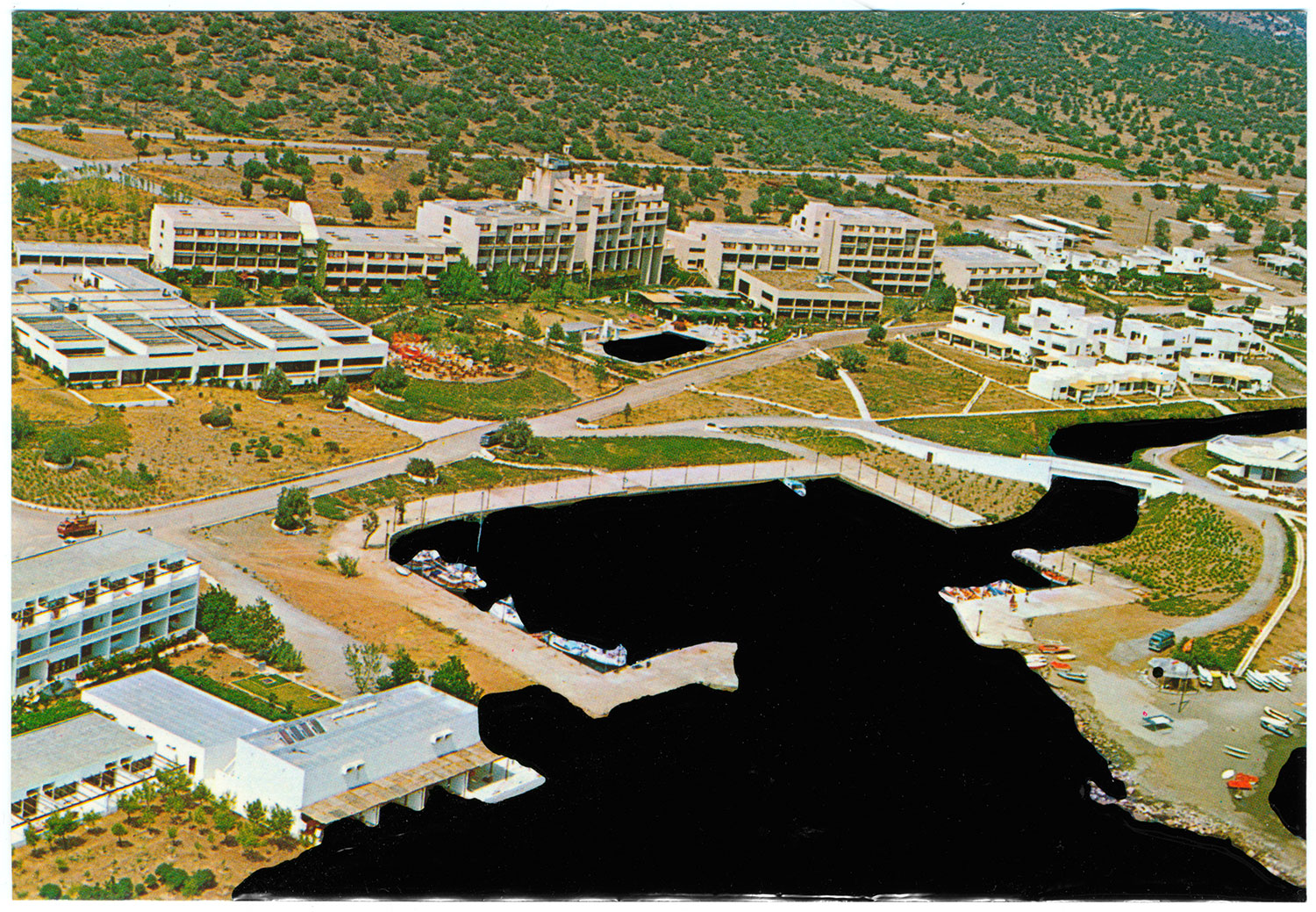 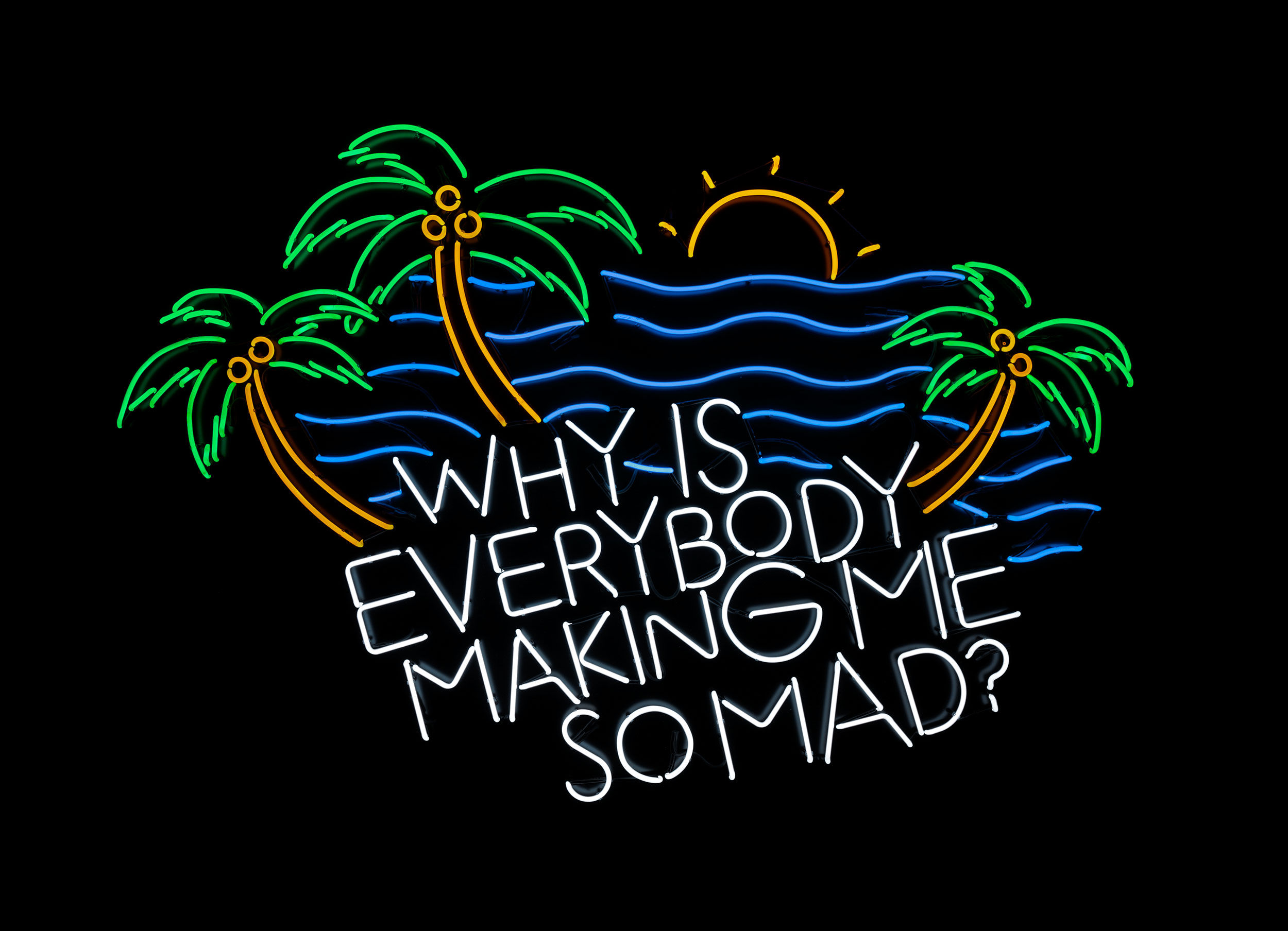 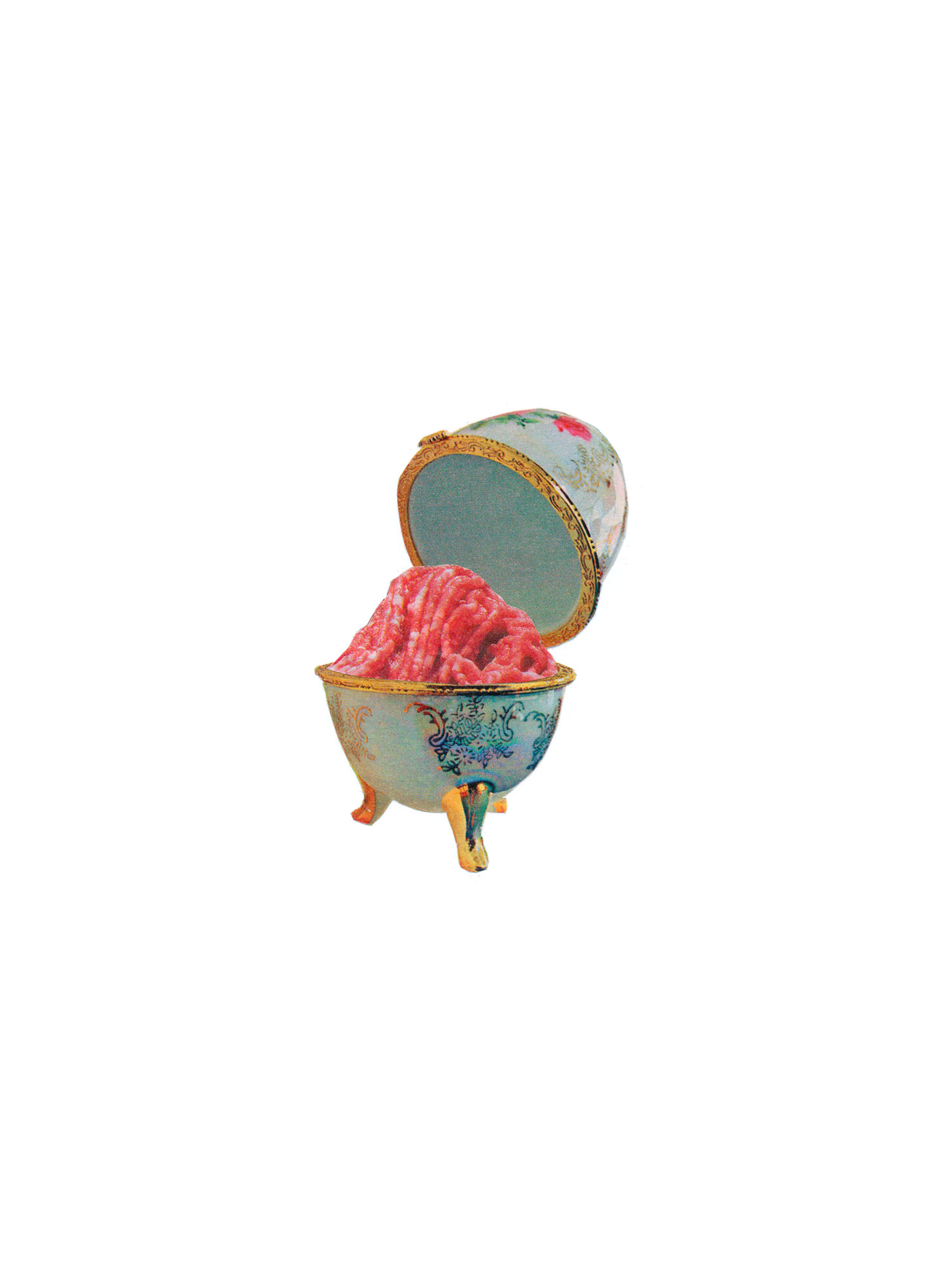 Below you can read an english essay by Dennis Knopf, followed by a
german one from Patrick Bauer.

Sebastian Haslauer is a dear friend, that’s why I’m not a suitable writer for this catalogue text. I can’t detach the work from his persona, his character and style, his preferences. I probably have more insights into his motivations than the general public, and so it is a true challenge to make sure everything I see in and write about the work is reproducible by the outsider.

What distinguishes Haslauer’s work the most is his (very amusing) cultural pessimism that lies beneath the pretty first impression his pieces make on you, and which connects cultural sophistication and intellectual poverty in a canny way. Haslauer’s main focus lies on the aesthetics of contemporary (as well as scrupulously outdated) pop culture, and so many of his pieces happen to look as if they could as well appear in advertisement or life style magazines – while others in turn are purposely unfashionable, ordinary and mediocre. However, all of them feature a degree of cynicism which has become sort of a tradition for artists, film makers, musicians and entertainers in post-war Germany: the goal is to portray the unpleasant and ugly aspects of our culture and to cultivate ignorance and inelegance to the extent of ridicule (sometimes more sometimes less obviously) in order to deal with social decay in this country without wagging a finger. Since the second half of the 20th century our Erbschuld (meaning inherited debt, referring to our Nazi past) has been suggesting rather critical art making, and artists such as Martin Kippenberger along with other so-called “Junge Wilde”, photographers like Peter Piller, musicians like Helge Schneider or guys like Stephan Remmler have included themselves as hopeless / proud elements of this portrait. Just as in satire, remaining within the aesthetics of the subject is considered a stylistic device.

The result is a distinct language of humor which might sometimes only become evident in the title of a work but that celebrates our dull, lowbrow and vulgar habits while making use of the painful effect of vicarious embarrassment (“Fremdschämen”). Needless to say Haslauer’s works seem to speak this language fluently. Whether you’re looking at his odd photographs, his handicraft paintings made of uncooked pasta (unfortunately both not featured in this collection), his portrait on his “business card” or his homage to decorative art sold in department stores which wannabe-classy, Prosecco drinking insurance brokers who love BMW would hang over their black duvet covered beds (entitled “Urlaub in Geberländern”); you can totally picture Sebastian laughing up his sleeve while producing all of them.

Don’t get me wrong, most of his works are very pretty and appealing, especially the strong and lucid visual language of his paintings intends to first of all attract, not scare nor embarrass their viewers. Layers of collaged elements allow for an emotional and experiential perspective to articulate. However, the state of always being on the edge between visual appreciation and disgust is a steady leitmotif throughout his creation, the way lines of graffiti represent both color and dirt, beautiful whipped cream rosettes1, (found on typical German Schwarzwälder Kirschtorte) become a symbol for the fragile ideal world our sick nation of krauts tries to hold on to.

No, it’s not just about hating, it’s about loving to hate. It’s this passion that makes the difference, that makes critique less anal and that gets Haslauer to produce his series of bright, screen-printed explosions. Blowing shit up is a more consequent form of critique than your ordinary depressing abstract painting. After all, that’s what good critics do – tear everything to pieces, right? Sebastian always does it in a colorful and diverting way and makes sure it doesn’t get boring, and at the same time limits the impact of his works making them what he himself dismisses as “flat shit”. Haslauer loves “flat shit”. The fact that he only uses acrylic paint and car finish for his paintings which allow for no visual depth to develop underlines this. Unlike stars like Takashi Murakami or Jeff Koons however, who stick to their slick and peachy style at all times, Haslauer isn’t afraid of going into a less obvious direction and sometimes shaming the beholder with ailing, whack creations. Or: they never cross a certain line of what’s considered “chic” whereas Haslauer dances the Macarena on it. Though as a child of the 1980s and 4-color printing process and comics and cartoons Haslauer also remains within the aesthetics of modern consumer culture and refers to the signs of pop culture (and even pop art in case of his Lichtenstein-esque explosions) threatening to be almost absorbed by them. In this context, his art has to be figurative eye-candy. To most people art isn’t anything more than an investment, just like collecting special editions of Swatch watches back in the 1990s hoping they will one day increase in value. And since our economic system is expected to collapse yet once again it’s buy or die; everyone is desperately searching to invest in real estate and other commercial assets. Haslauer’s neon piece “Crysis” perfectly captures this thrilling / soothing moment by combining the classic symbol of advertisement, the neon sign, with what capitalism has resulted in, permanent crisis.

Or, as his piece “Hasenbau” puts it: we’re flooded. The painting which appears as a still from the Warner Bothers’ cartoon “Bugs Bunny” depicts what seems to be the inside of Bugs Bunny’s den almost completely flooded with water with only the tips of the bunny’s ears sticking out. It’s one of the few, if not the only piece where Haslauer, also known as “Hasi” (bunny) to his friends, attempts to express his personal feelings as a struggling visual artist towards both his own and the world’s situation at large.

It’s hard not to be beguiled by his cultural pessimism when it’s so poetic, and when our civilization does feel so obviously pointless at times. We’ve come such a long way, millions of years of evolving from sea monkeys to culturally sophisticated humans developing incredible computing power and hi-tech devices capable of, well, displaying the glossy effect in HD or rapidly downloading a whoopee cushion app on the street. Dragan Espenschied’s re-interpretation of that famous old Navajo saying keeps coming to my mind: “Only when the last pixel has been anti-aliased and the last security update has been installed will we realize that our Dolby Surround system doesn’t beep.” (Where I believe “beep” can both refer to the typical 8-bit music from obsolete home computer sound chips and the monotone chirping of a bird in nature.)

Haslauer’s series of tiny, deformed sculptures symbolizes the maze of hypermaterialism and infinite consumption that characterizes our generation by resembling the addictive nature of collectibles – which those apps, mp3s, movies, Pokémon cards, handbags, ringtones etc. all are. The miniatures are three-dimensional collages made of old, rearranged toys, parts of dollhouse furniture, and Kinder-egg models, and although bringing together different topics they always operate in an interrelation of reality and its plastic effigy. Their colorful ugliness proudly represents what’s embodied in our glossy iPhones and limited edition sneakers: on one hand prestige and cultural significance, on the other hand cheap labor under terrible conditions, greedy pricing policy, and superabundance. The act of collecting has itself transformed from accumulating objects (stamps, butterflies, Kinder-egg models), where getting is equally important to the hobby as having them, into a form less occupied with having but instead almost completely centered around getting. As with another two phenomena of our consumer society, fast food and pornography, the promised and much anticipated moment of ultimate satisfaction often results in spiritual emptiness and even disgust. “You’re all pizza and fairy tales!” as John Lennon reportedly yelled at Paul McCartney on the phone. Funnily enough desire and lust can be endlessly generated even if the disappointment has been experienced numerous times before. We need to continue consuming in order to define who we are regardless of the fact that the sheer state of physical saturation has quickly led to displeasure and nausea before. At least by now with over 25 billion downloads from Apple’s app store our consumer culture has entered the next stage. I wonder how many of those apps are being deleted soon after their download to make room for new ones2…

I also see Haslauer’s plastic sculptures series as an ironic commentary to the commercially dexterous strategy of producing endearing little creatures to sell cheap, “dumb” games for “smart” phones like the very successful “Angry Birds”. In our interview following below, Sebastian gives further insights into his miniatures.

And again it’s those binaries that can be found throughout Haslauer’s work: addiction vs. saturation, excess vs. boredom, beauty vs. deformation, and so on. On the one hand “Ohne Ende” (without end) reads as a tribute to the insatiable desires of our consumer society and the limitless way we retrieve infinite amounts of content anytime / anywhere; at the same time “Ohne Ende” also stands for artistic freedom ad infinitum, the impetuous pleasure of visual expression, the self-sufficient celebration of making. Disregarding the rules to success as an artist – namely consistency, seriousness, establishing trademarks, engaging in the contemporary art discourse, etc. – Haslauer rejects the conception of super cerebral smart art dressed in French theory playing hard-to-get, and openly questions his contemporaries’ elitist œuvre. It’s an edgy combination of the reactionary and aggressive attitude behind his work and its recurring themes such as childhood and apocalypse that makes it so rewarding. Sebastian is a talented painter and although the term “decorative” is regarded an insult by most artists it means an accomplishment to him.

“Ohne Ende” equally stands for the open ending his works offer, the possibility to think them further and to develop our own sense of their right to exist. “Ohne Ende” also means unlimited capacity for love.

 I find it kind of a miracle Jeff Koons hasn’t used them yet; imagine supersized whipped cream rosette sculptures and paintings… 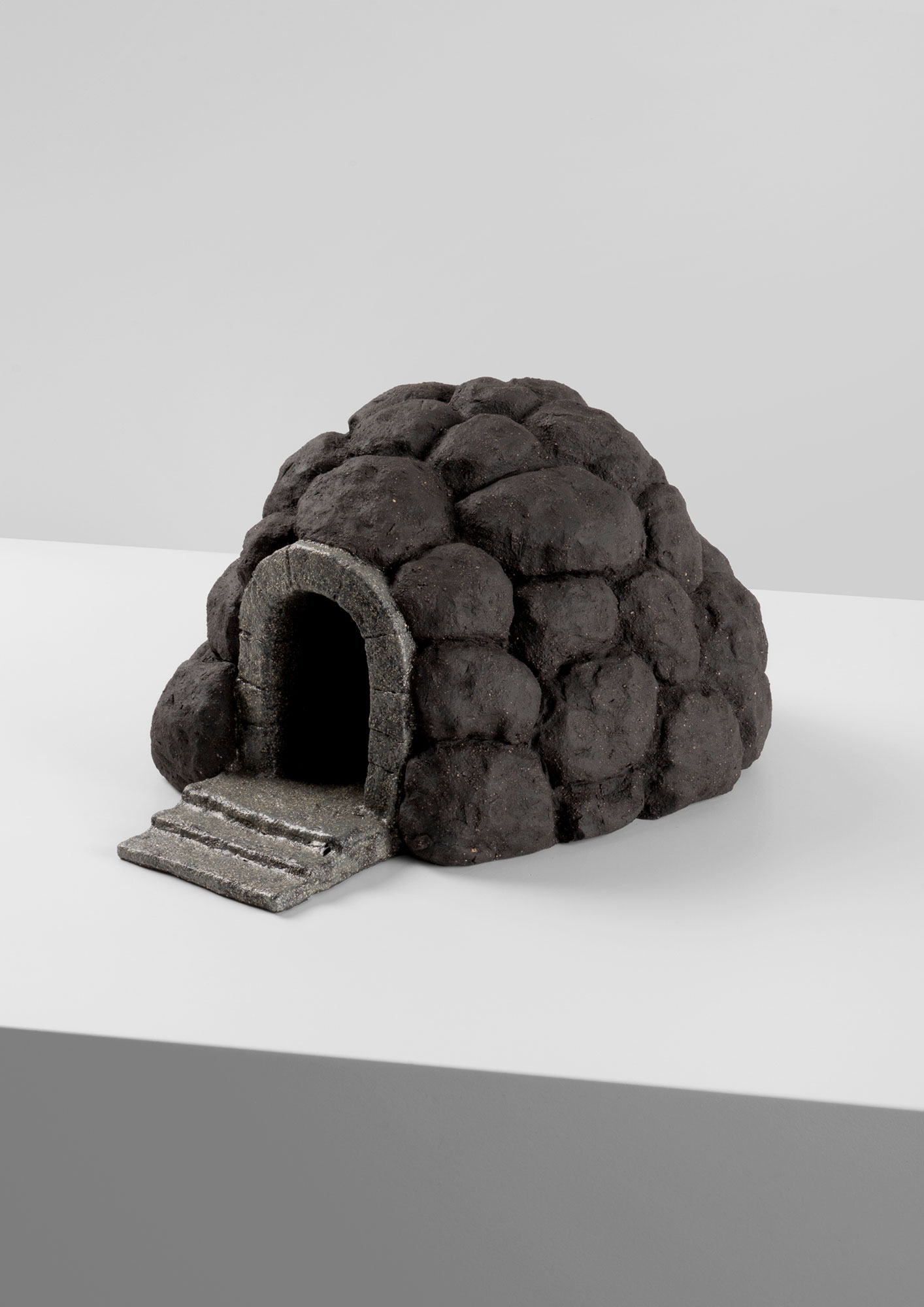 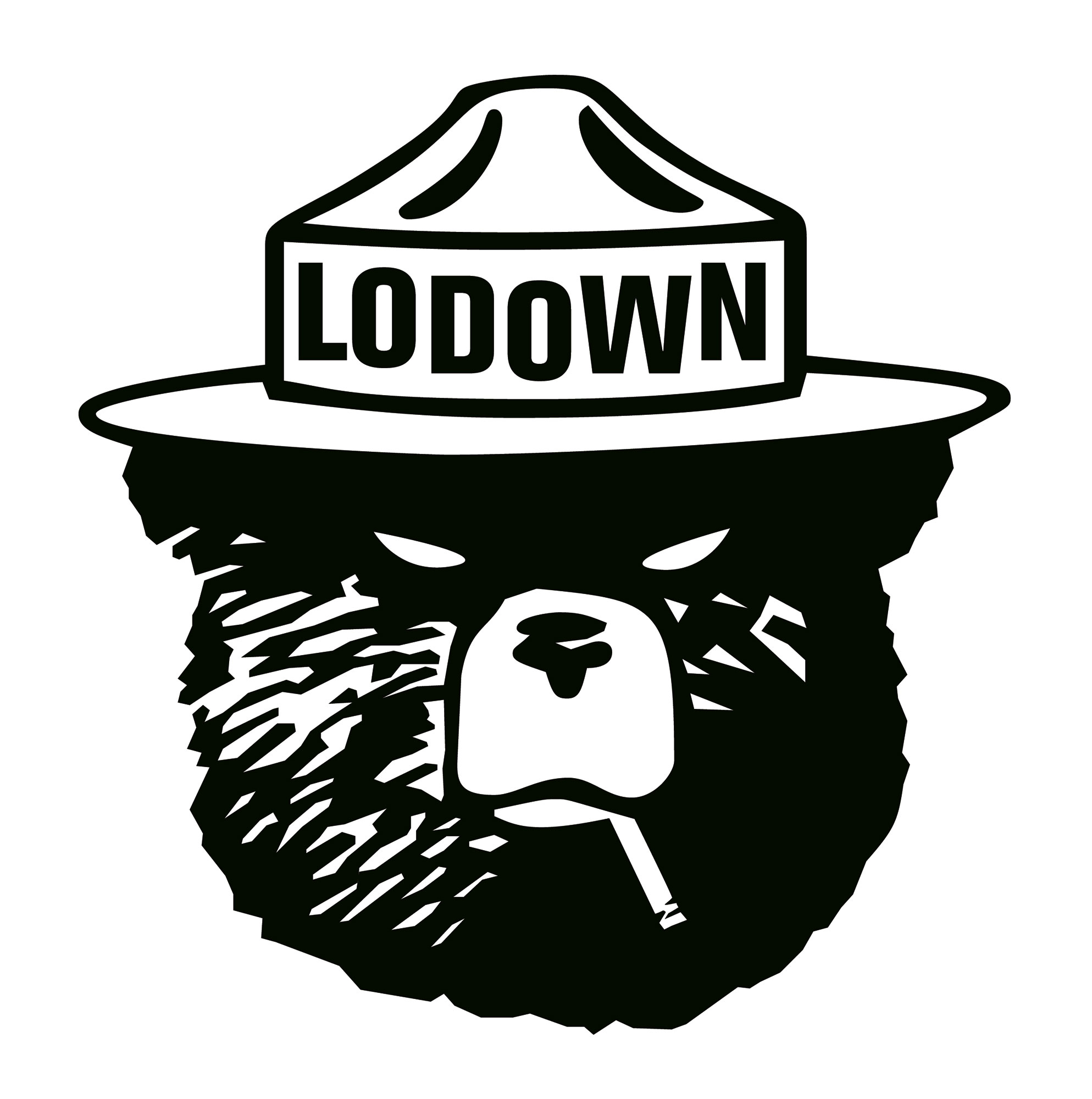 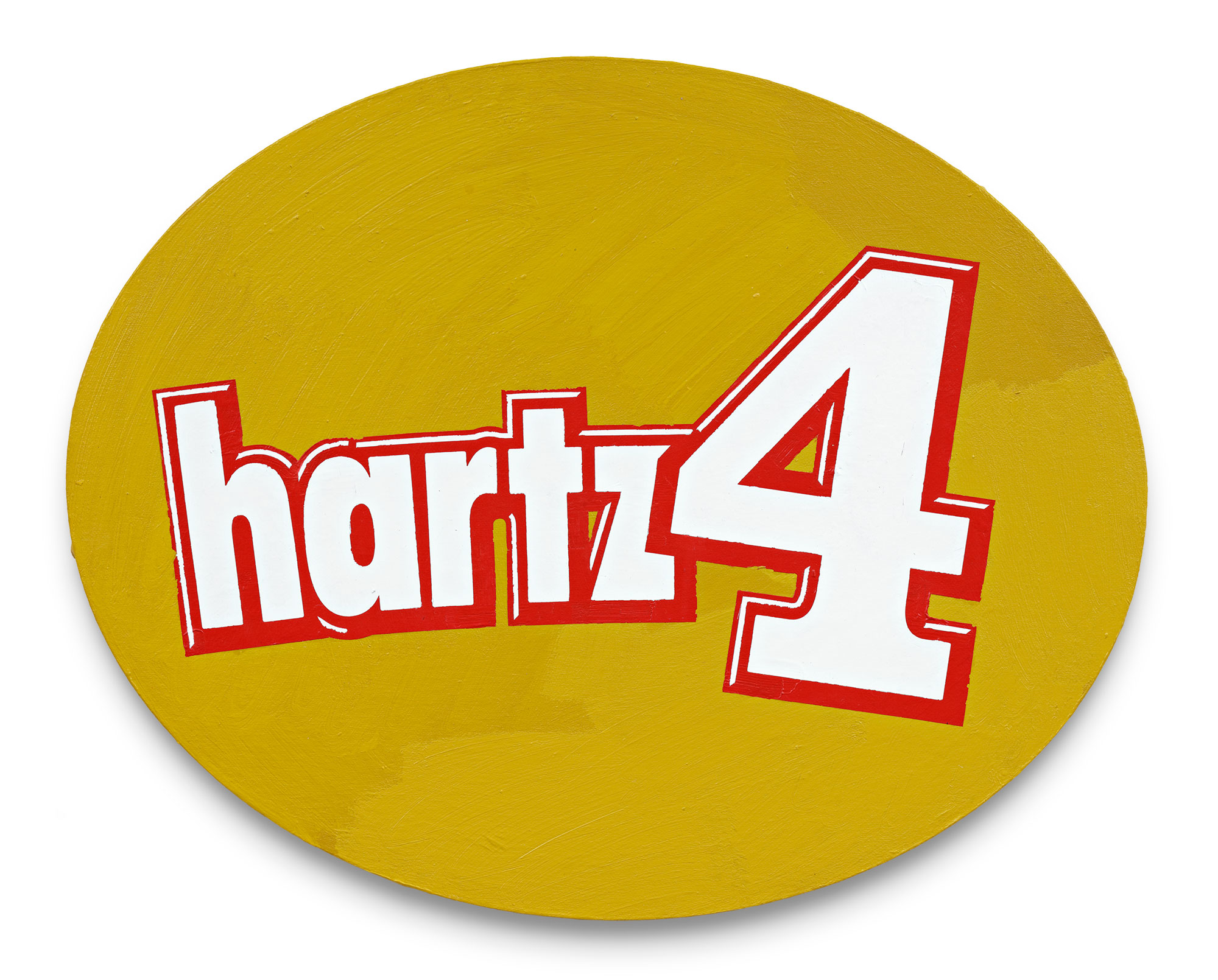 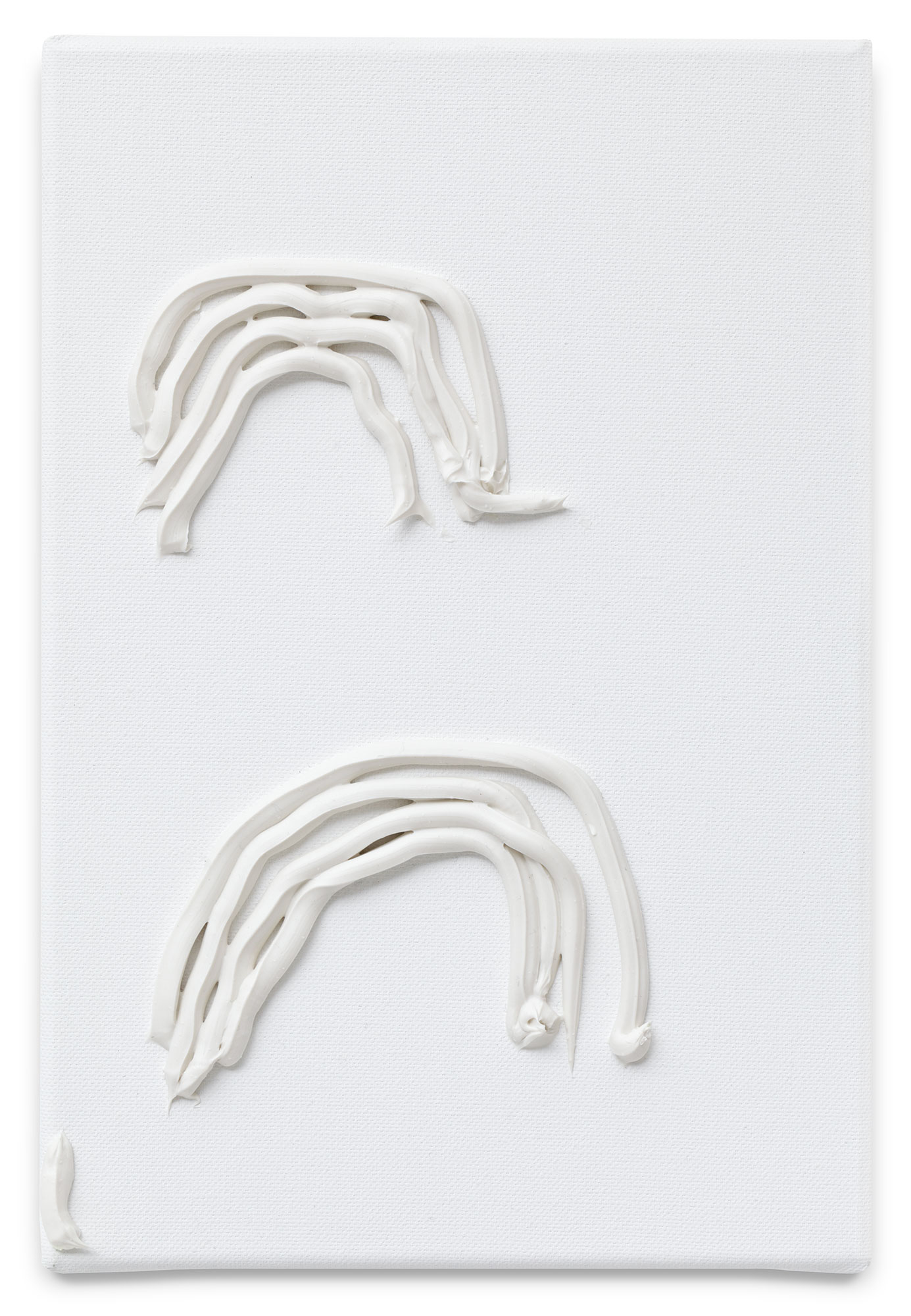